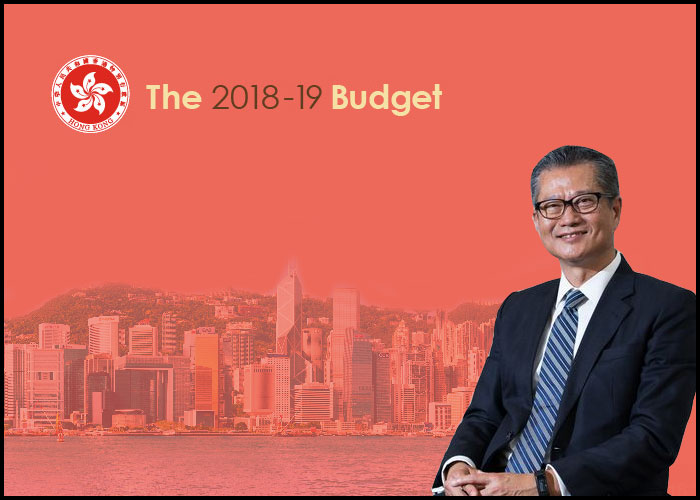 Mr Chan announced that Hong Kong has a fiscal surplus of HK$138 billion, and the fiscal reserves are expected to reach HK$1,092 billion by 31 March 2018. About 40% of the surplus will be shared with the community through one-off concessionary measures, tax breaks and tax rebates and the remainder will be used for improving services and investing for the future.

On the economy, Mr Chan reported that Hong Kong had sustained notable expansion throughout 2017, with the economy growing by 3.8% for the year as a whole, up from 2.1% in 2016 and higher than both last year’s Budget forecast and the average trend growth rate of 2.9 per cent over the decade from 2007 to 2016. The GDP per capita of Hong Kong has now reached US$46,000, and is among the highest in the world. Exports turned stronger amid increased global growth momentum and domestic demand was likewise robust, thanks to favourable labour market conditions and upbeat economic sentiment. Mr Chan said he was cautiously optimistic about Hong Kong’s economic prospects in the near term, predicting GDP growth of between 3 and 4 per cent for 2018.

Mr Chan said Hong Kong needs to keep abreast of and ride on three major trends of the global economic landscape: the development of I&T that has revolutionised the traditional, capital-intensive business model based on tangible assets; the shift in global economic gravity from West to East; and the rise of protectionism in some advanced economies.

With the surge of I&T and fierce competition between economies, the Government will examine Hong Kong’s competitiveness, its economy and the current state and direction for development of its industries from a forward-looking and strategic perspective. Playing the role of a “facilitator” and a “promoter”, the Government will introduce timely and appropriate measures to enhance Hong Kong’s I&T environment, attract companies from new economy sectors and research institutions to set up their presence in Hong Kong and nurture talent for a knowledge-based economy.

To achieve this, the Financial Secretary has set aside an additional HK$50 billion to support Hong Kong’s I&T development in key areas such as biotechnology, artificial intelligence, smart city and financial technologies (fintech). Key measures include:

·   Allocating HK$20 billion for the first phase of the Hong Kong-Shenzhen Innovation and Technology Park in the Lok Ma Chau Loop;

·   Injecting HK$10 billion into the Innovation and Technology Fund to continue to support applied research and development;

·   Earmarking HK$10 billion to support the establishment of two research clusters, on healthcare technologies and on artificial intelligence and robotics technologies, to attract the world’s top scientific research institutions and technology enterprises to Hong Kong;

·   Setting aside HK$10 billion to upgrade the facilities of the Science Park and enhance support for enterprises in the Park; and

·   Allocating HK$200 million to Cyberport to enhance the support for start-ups and a further HK$100 million for Cyberport to promote the development of e-sports.

The Government will also inject a further HK$1 billion into the CreateSmart Initiative to strengthen support for the development of the creative industries, especially in nurturing talent, helping start-ups and enhancing public understanding of the value of creativity and design.

While fostering the development of new industries, the Government will also strengthen the traditional industries in which the city enjoys clear advantages. Mr Chan has set aside a dedicated provision of HK$500 million for the development of the financial services industry in the coming five years, providing necessary support for bond market development, Fintech, green finance, manpower training and other aspects of financial services.

Mr Chan said that in the dedicated chapter on Hong Kong and Macao in the Central Government’s 13th Five-Year Plan, China indicates support for Hong Kong to leverage its unique advantages, reinforce and enhance its status as an international financial, transportation and trade centre, and strengthen its status as a global hub for off-shore Renminbi business and its role as an international asset management centre.

In order to keep up with developments in the financial sector, Mr Chan said that Hong Kong needs to enlarge and enrich its pool of talent. To this end, the Hong Kong Monetary Authority has been asked to set up an academy of finance in collaboration with the Financial Services Development Council and the stakeholders of the financial sector.

The transformation of the Chinese economy from rapid growth to high-quality development and supply-side structural reform have created enormous opportunities for Hong Kong, said Mr Chan. The Belt and Road Initiative and the Guangdong-Hong Kong-Macao Bay Area development will also serve to enlarge the hinterland for business development of Hong Kong enterprises and expand their market coverage. With this in mind, the Government will also provide HK$250 million in additional funding to the Hong Kong Trade Development Council for work related to the Belt and Road Initiative and the Bay Area development, promoting the development of e-commerce and enhancing Hong Kong’s role as a premier international convention, exhibition and sourcing centre.

To promote green finance, Mr Chan proposed to launch a green bond issuance programme with a borrowing ceiling of HK$100 billion. The sums borrowed will be credited to the Capital Works Reserve Fund to provide funding for green public works projects of the Government.

On tourism, the Government will allocate an additional HK$396 million to the industry, of which HK$226 million will be provided for the Hong Kong Tourism Board to implement the Development Blueprint for Hong Kong’s Tourism Industry released by the Tourism Commission last year. A further HK$310 million is earmarked to support Ocean Park in developing education and tourism projects over the next few years.

In parallel, Mr Chan outlined a variety of initiatives to improve quality of life for the people of Hong Kong. These aim to improve elderly and rehabilitation services, support the disadvantaged, care for the young, strengthen support for ethnic minorities and promote opportunities for job seekers with special employment needs. He also detailed a raft of measures to reduce the tax burden on individuals and to share the fruits of Hong Kong’s economic success with the community, which include widening the tax band, adjusting tax rates and increasing allowances and tax deductions. There are also one-off tax relief measures including reducing salaries tax and profits tax by 75%, subject to a ceiling of HK$30,000, which benefit 1.88 million salaries taxpayers and 142 000 profit taxpayers.

In conclusion, Mr Chan said that his aim with this budget was to enable Hong Kong to forge ahead and make it a better place to live and work in. He pledged that the current-term Government is ready to think out of the box and act proactively to open up new horizons for Hong Kong.