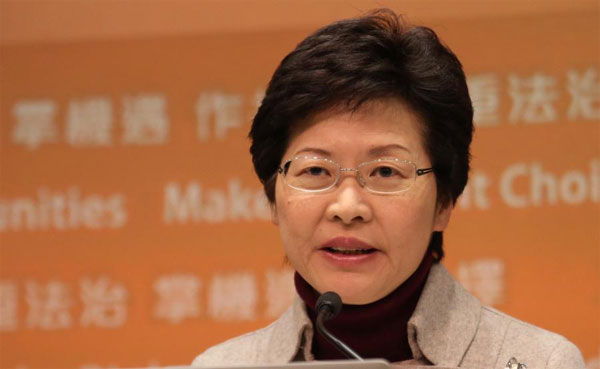 Mrs Lam won 777 votes from 1,194 members of the Election Committee. The threshold for winning the election is 600 votes.

Mrs Lam also called on the Acting Chief Justice of the Court of Final Appeal, Mr Justice Robert Tang, and the President of the Legislative Council, Mr Andrew Leung.

At the meeting with Mr Justice Tang, Mrs Lam stressed that judicial independence and the rule of law were the core values of Hong Kong. She also assured Mr Justice Tang that she would safeguard these values steadfastly.

During her subsequent meeting with Mr Andrew Leung, Mrs Lam emphasised the importance of maintaining a good relationship between the legislature and the executive. She pledged that her government would work closely with the legislature and its members.

Meanwhile, the Office of the Chief Executive-elect (CE-elect’s Office) has formally commenced operations to ensure a smooth transition to the new Government.

The CE-elect’s Office will support Mrs Lam in undertaking major tasks including forming a governing team for the new Government; drawing up a policy plan for the new government based on Mrs Lam’s election platform; making arrangements with the incumbent government for a smooth transition, and liaising with different sectors of the community and participating in various official activities. It will cease to operate by June 30, 2017.

Carrie Lam Cheng Yuet-ngor was born on 13 May 1957. She joined the Hong Kong Civil Service as an Administrative Officer in 1980 after graduating from the University of Hong Kong. In the early part of her career she served in a series of policy bureaux and departments covering health services, district administration and security. In the 1990s she spent almost seven years in the Finance Bureau, involved in budgetary planning, expenditure control and the government’s capital works programme. She became Director of Social Welfare in 2000 and was appointed Permanent Secretary for Housing, Planning and Lands (Planning and Lands) in November 2003.

Mrs Lam was the Director-General of the Hong Kong Economic and Trade Office in London from September 2004 until March 2006. As head of this office, she was responsible for promoting Hong Kong’s trade and economic interests in the United Kingdom and 16 Central and Eastern European countries. In March 2006 she returned to Hong Kong to take up the position of Permanent Secretary for Home Affairs.

On 1 July 2007, she left the civil service and was appointed a Principal Official in the Third Term of the Hong Kong Special Administrative Region Government, taking up the position of Secretary for Development.

In 2012 she was appointed Chief Secretary for Administration, the most senior rank of principal officials of Hong Kong, in the Fourth Term of the Hong Kong Special Administrative Region Government. She stepped down in January 2017 to conduct her election campaign, and won the Fifth Term Hong Kong Chief Executive election on 26 March 2017.

Text by Hong Kong Economic and Trade Office in London